{Topic from the hat: Hugs}

This may come as a surprise to those of you who know me real well – but I hold a certificate of hugging.

It is classed, perhaps, as one of my most embarrassing moments.  But what gives, I was five years old, I can and could get away with those things! 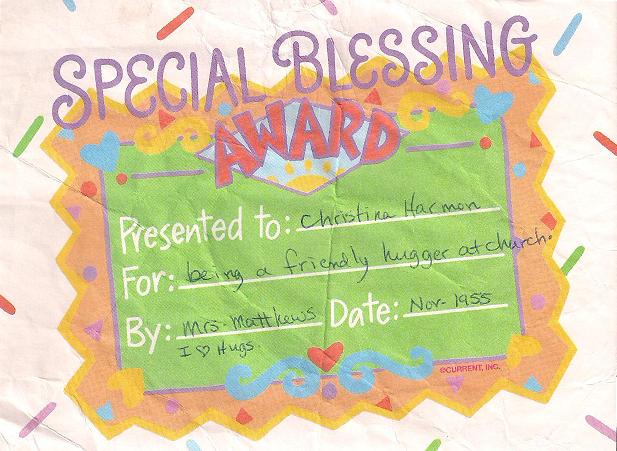 In my younger days, my friend and I would go around in church, and greet everyone we could during the five-ten minute greeting time.  For us, it was what we did.  Without second thought.  And thus, an older lady in the church presented us with this certificate of hugging.

I used to hug everyone, and anyone.  Hugs for all!  Hug here, Hug there.  I might have had, a hugging problem.  I couldn’t be for sure.  There was one time, I was hugging a friend who we called uncle…he was a shy man, not one big on hugs.  His wife was an outgoing bustling kind of woman.  And I hugged him.  And then kissed him.  And when he turned his face – to have me plant my kiss on his cheek – I grabbed his face between my hands and turned his face right back towards me and planted it right there on his lips.  Where all good kisses belonged.

I was scolded, greatly.  As our “Aunt” instructed me of all the ways a lady should NOT kiss another womans man!

I was probably seven at the time.

That was the last kiss I recall.

When my friend moved out of town, my hugging days sort of died out.  Then we got a new pastor.  Who was from California.  He had never been around a group of people such as ours before, and upon greeting them – I hugged him.  Now.  He is a tall, tall man.  And I was about ten.  And not much taller than I am now.  When I hugged him, I remember hugging him somewhere around his waist.  Or perhaps knees.  I don’t remember his look, or his expression, but Im sure it was something of shock and dismay.  He wasn’t, I later found out, the hugging kind of person.

I don’t DO hugs anymore.  I don’t LIKE hugs.  Maybe its something about someone being THAT close, in MY space bubble, or having my butt grabbed one too many times.  I couldn’t be for sure.  I couldn’t honestly tell you WHY I don’t like hugs.  I just don’t.  There are so many things, that could go wrong with a hug.

“Oh but its simple” they tell me.  They.  Apparently have never tried hugging before.  Hugging is not a task for the weary.  Its not for the weak in heart.  Hugging is a difficult task.  Do you do under-under?  Under-over?  Over-under?  Up or down?  How long do you hold on?  Do you hold on?  When do you let go?  Who is to initiate the “Let go”, do you go full face, side ways, or shoulder?  Should you hug a man first, and then a woman, or a woman first, then the man?  How much space do you leave between you and the hug-e, and who is the hug-e, and who is the hug-er?

“You put too much thought into it, just HUG!” they tell me.  But then there is a problem.

Im sure you all have those horror stories of that time great-aunt Filda tried to hug you.  But I clearly recall the day I tried to give someone a simple hello – and I kid you not, no exaggerations about it – she leaned in for a hug, and picked me up.

Now I don’t know about you, but as a ten year old, being picked up and HUGGED, was not something I particularly enjoyed.

In which case, leads me to another question: When hugging, are you required to pick up your hug victim?

Im not a cold hearted SOB, just because I don’t hug.  Its quite simple, to be honest, hugging (and kissing – ACK!) is just not my cup of tea.  I don’t like to be caught in the awkward silence of hugging, stuck between a hugger and my destination.  In short, unless you are my cat – please don’t try and hug me.

Or I might need to look into getting my certification in kick boxing sometime soon.

What about you – are you a hug-er?  The hugged?  Or stuck in the awkwardness between a hug-er, the hugged, and your destination?