While I don’t have six dogs this time, I have two very different, very hyper, very active dogs -which is pretty much the equivalent of about ten dogs. I also have Yoshi. And recently added another shy, nervous first timer who isn’t sure she wants to be here. Really tho, I don’t blame her!

There is no such thing as a typical day ‘round these parts, but today was just too much to not try and dialogue a bit…

First, the cast of characters:

Cedar – a blue heeler with plenty of energy and plenty of love to go around. He is so full of himself and doesn’t know when to stop. He’s a lovable guy -but has enough energy to power the town.

Chester – a giant chocolate lab who doesn’t quite comprehend how big he really is. He feels he is perhaps the size of a poodle and has small dog syndrome because of it.

Abbey – the new dog on the block, an older (11) shepherd mix who really just would prefer to spend all day with her owner. Not three other dogs.

And of course, we have Yoshi. My girl who just doesn’t appreciate other dogs getting in her space and doesn’t mind telling them so.

So because of the new comer, I switched up our sleeping arrangements and Cedar ended up in the room with Yoshi and I.

This morning started with him leaping into bed with Yoshi and I. This guy doesn’t just jump tho, he flies. Quite literally. All four feet off the ground, airborne style -which means I get the full force of him on top of me. Unable to contain his excitement, he wiggles and whines. Yoshi, does not appreciate this -and starts to growl. Which makes Cedar bark -which makes Yoshi bark. So together they bark until I tell them to knock it off…..which means my cover is blown. I am not asleep. They can both now harass me. Or, you know, wiggle and growl and slobber and fight over who gets to snuggle me.

The morning is started earlier than I intend…

Breakfast: Four bowls. Four foods. Four very different diets and preferences. Four different amounts. Mixed and stirred, dished and given. Three out of four eat. The new comer still isn’t settled so she passes. Don’t worry, I will convince her its safe to eat eventually. 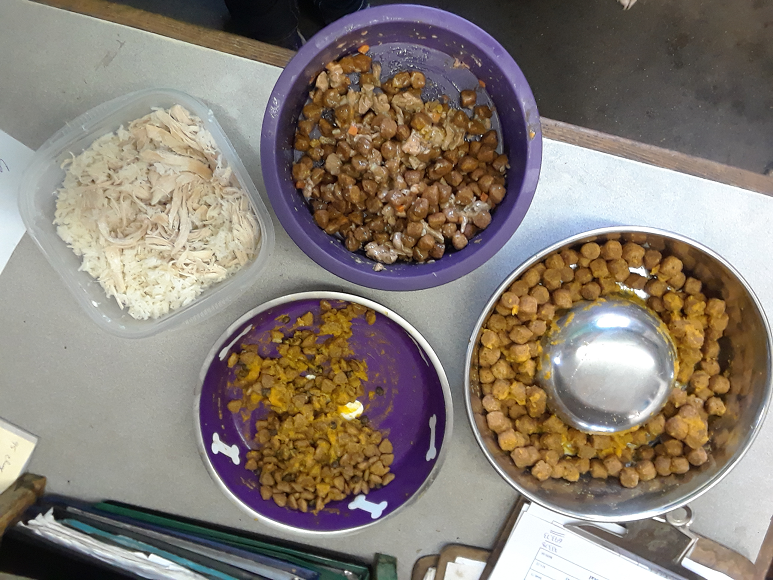 After breakfast is devoured, we head outside for a brief game of ball. One ball. Four dogs. I will let you do the math.

Once inside I hand out meat bones. A favorite here at the farm. I generally don’t give them bones unless I am here to supervise. Yoshi is much too protective, and I don’t want to chance anything. But since I am here today -bones it is!

Yoshi sets to work, stealing one bone at a time.

Chester finds a ball. Cedar steals the ball. They set to work ripping it to bits. I take the ball away. I’ve dealt with enough neon colored balls getting worked through the digestive system.

Abbey stands up which ques panic amongst the rest. WHO IS THIS DOG! Cedar gets a bit too friendly. Chester gets a bit too excited. Yoshi takes this ample opportunity to steal a bone.

Rest time. We rest for 2 seconds before jumping up and running in circles. Someone SAID something! We apparently, have never heard a human voice -que barking. One barks. We all bark. Bark bark bark. Yoshi steals another bone.

Abbey stands up again, but this time, sways a bit too close to Yoshi and her nest of bones. Yoshi growls. Chester barks. Cedar runs in circles. Abbey whines. Someone opens the door.

All dogs are rounded up. Put back in their respective beds. The door opens. In walks a neighbor…with a bag of bones. Her dog doesn’t like them. Would mine like them?

…and so the day begins!