It’s official.  I might be just a little bit crazy.  Back in October I found myself watching a total of six dogs at once.  It wasn’t until after the fact did I realize just HOW crazy I might have been.  But somehow -I have found myself in the same position once again, only this time -the dogs are all big dogs.

It seems a little less chaotic this time, however.  Perhaps because they all live in the same general area, or perhaps because mom is back in town and can lend a hand.  Either way -we are back to having six dogs.

Kilo is a purebred lab.  She is one of the best dogs I have ever watched, and am terrified I will break her!  She listens SO well!  Her puppy dog eyes are because she is trying to tell me she doesn’t like plain dog food and needs more treats.

Mr. Winston is an good old boy.  We used to watch him -many, many years ago.  Probably 10 years ago.  He is old, but still good.  He got himself stuck in the bushes this afternoon, took me about ten minutes to coax him out!

This is Bob.  Bob has been here before.  He is surrounded by female dogs -and enjoying every minute of it.  Don’t let his sad look fool you!  Every time I see him, I see Scrat: 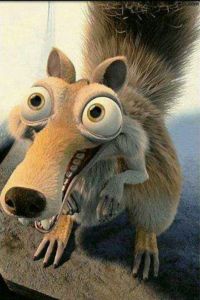 He is a good boy too.  He is easy going and gets along with every dog.

Miss Harper has been featured here before.  She is still hanging with us.  These sad eyes are brought to you by the word “sit.”  She loves to run, jump, play and do anything BUT sit.  Don’t worry -she was back to smiles and kisses after the picture. 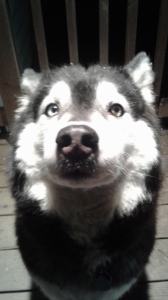 Belle is a husky.  She has one brown, one blue eye.  She is a beauty.  A nut.  A wild girl who loves to play in the snow…I guess being a husky it runs in her blood.  She was more than happy to smile for the camera -perhaps because I was holding a treat?

and back by popular demand, Yoshi!:

The ringleader of it all.  Her look says it all.  I have been super happy -she has done VERY well with all these dogs in her house.  The only casualty has actually been to her -I let Yoshi into Harper’s area and Yoshi came in with a bit too much gusto.  Harper bit her ear.  But she is healing nicely.  She is going to be one lonely nut when all these pups leave!