I sat in the car, watching the rain pour down on the windows faster than the wiper blades could dare to keep up with. It was a 2 second dash into the house, but I couldn’t move. I was stuck. Thinking. In a car that smelled oddly of dog. I had just finished teaching my Sunday school class, the lesson, as usual -I think impacted me, more than it did the kids.

They enjoy the snacks and the fun pictures -I know this because they told me so. They ‘suffer through’ the lessons, more or less to humor me I think, but the main event is when they get to do their workbooks. It usually takes less than five minutes before the innocent picture has taken a turn. Today it was a donkey. A donkey -to remind us not to be stubborn -a donkey that quickly turned. One had a light saber. Another machine gone. One donkey was in an especially rogue mood -with about ten little stick people hanging off it and fire coming from his eyes. If I’m being honest, I enjoy the pictures too.

The lesson, most timely planned -was on the promise that the Lord will direct your paths. We looked over a handful of examples -familiar ones, Jonah, Noah and the story of Jerico. We talked about the struggles these people might have faced -when doing the right thing, and of course -how doing the wrong thing, how doing OUR idea doesn’t usually end up well. We talked about it practically, we got off on a few rabbit trails and talked a lot about direction…

But then one-story example came up. The story of Uzzah. It has been years since I read that story, and to be honest -it stumped me today as much as it did back when I first heard it. Why, I asked myself, did God take such DRASTIC measures to kill someone who was keeping the ark from falling?! He was, after all, helping, wasn’t he? I considered leaving the example out -but something kept drawing me back.

I read up on the story last night, looking at the history, surrounding verses, giving myself a little insight to the story and then presented it to my wonderful group of all boys between the sweet ages of seven and nine.

And they had questions. Because of course they did.

We spent a long time on that story, and then it went off on a rabbit trail about donkeys and carts -because of course it did.

We ended the lesson talking about how we should be quick to ask for God’s direction -the first time, and not after we have made our decision and messed things up…and then we started drawing light-sabers and whatnot’s on our donkeys. Because hard as I try, if you give them a pencil -that picture will end up with a story. A story that has nothing to do with our lesson. Except they will try to make it relate. Because of course they will.

The original idea of the picture was to remind us not to be stubborn, like a mule. Drawing from the illustration that mules get stubborn and need to be guided with a “bit and bridle.” But somehow, I think they will remember it just a bit differently.

I stared at the rain.

Questions I have asked over the past few weeks running through my mind -wondering if I was doing something wrong, or something right, or something at all. Wondering if I am on the right path. I’ve been feeling all the big feelings lately -of guilt, and sorrow. Of sadness and frustration. And happiness. Because there is always some happiness.

But tonight, as I stared out the window -it was as if my weeks problems and questions collided with my lesson: God’s way is always right. Sometimes God’s answer isn’t my answer. But that doesn’t mean God doesn’t hear me. It might just mean He said no. And if He said no, I shouldn’t turn the other way and say yes. I should accept His no. I should accept His answer. Why? Because His way is ALWAYS right. No matter if I understand it or not.

At the end of our lesson, a few moments before they are sent back to their parents -I always ask them to tell me what they learned. They usually add in a little bit of serious with a whole lot of silly. Today their answers were mostly donkey related. Because, donkeys are cool, or something like that.

The answers varied but they all answered, in their own words -what I have been struggling to grasp for years: God knows the plan. There is no need to be stubborn (like a donkey). Ask God for direction, trust His plans, accept His answers -and don’t be a donkey. With striped blue pjs, red light-sabers, machine guns and chain link vests. 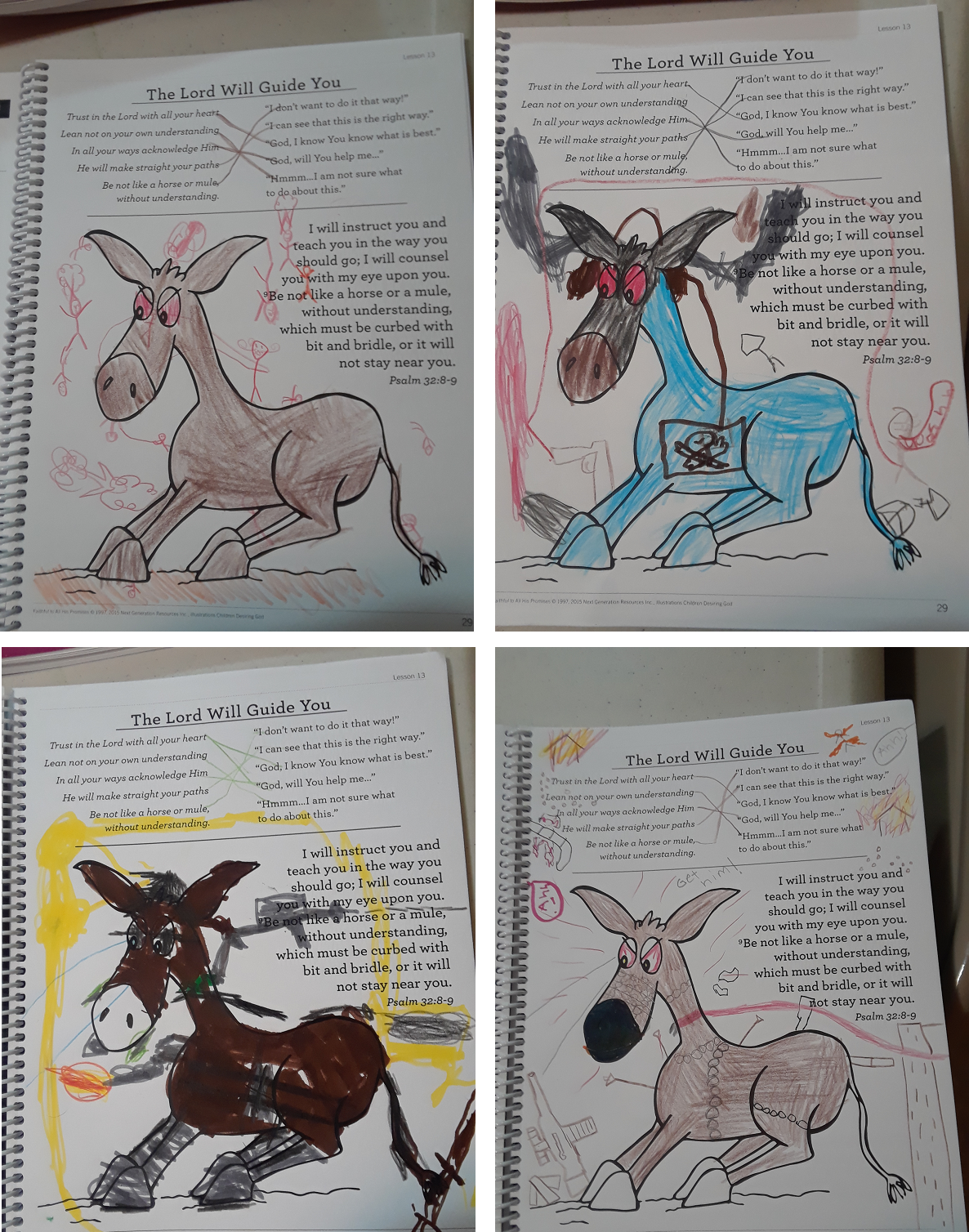 These kids might only look back and remember striped donkeys with light sabers and machine guns -but I will remember more. So much more.