So about a month ago someone approached me and asked if I wanted to play softball. I didn’t put too much thought into it before agreeing to meet once I got a glove.

While this may not sound like a big deal -I should probably interject a little background. I am 26. I have never played sports. I actively run from balls being thrown at me. I played a few rounds of volleyball a few years ago.  I nearly broke my thumb at one of those games. I have never held a bat. Never thrown a ball (except to the dog) and have never been interested in how the game works. In short? I am a rookie that knows nothing about the game except what my mind tells me: Which is to run from the ball.

The first game I went to the coach told me I would just sit out and he would explain the rules as it went along. I sighed relief and took my position as bench warmer. That I could handle. Not two minutes later he called my name “You! Over there!” apparently the other team was short a player so figuring he wouldn’t be losing much -he farmed me out to the other team. My first time ever holding a bat. My first time ever swinging at a ball. My first time ever running bases. I hit the ball. Ran the bases. Scored a point. For the opposing team.

I went home later that night and googled everything I could on softball.

Two days later we met for practice where I would spend an hour learning the rules of the game and having it drilled into my head “Run TO the ball” -after 26 years of running FROM a ball I was now trying to retrain my mind to run TO the ball. I was also trying to learn how to catch the ball, keep the ball from smacking me in the face and who to throw said ball to. We only covered about ½ the positions, but at the end he told me I had a great throwing arm and had potential. I assumed that was a good thing, because I really didn’t understand the other softball terms that were being tossed around.

I couldn’t walk right for a week. My hand turned blue and purple -because I had to learn the hard way that you do not catch a ball without a glove. I couldn’t lift anything for days.

…and then I went out of two for two weeks and missed out on a game and practice.

Last week was our third game, and my second.

We were short two players which meant that instead of playing outfield -I was put as catcher.

I will let that sink in for a moment.

Last night I managed to hit the ball twice. We lost by one point. But from what I hear -we did a really good job as a whole. Considering the opposing team had all their players (and some really good ones at that) and the empire apparently took two points off our game.

I really don’t know why or how or any of that…I am still trying to understand the rules, the game and the ball. I still find myself cheering on the opposing team and only manage to catch the ball about ¼ of the time. But when the bat hits the ball, something about the cracking noise sends my legs flying as fast as they possibly can. To where? I am really not sure. I just run. Then run again. Then run again. And hope for the best.

There were more people in the dug out that belonged to me than the team last night -99% of the fam was there, cheering me own, squawking out random bits of encouragement to me and the other players. Grinning like bafoons right along side me as I stood at first base after hitting a squiggly ball that gave me enough time to run.

If nothing else, it will be an interesting summer with lots of flying balls -and at the end, at least I will be able to throw the ball for the dog a little further than normal…now if only she could throw them to me so I could work on my catching!

Amanda and her fam are in town for a few months and as a result she took a few…pictures. Of course she didn’t catch me hitting the ball or running like a fool…her pictures are probably the most accurate representation of what I look like 98% of the time.

Not so pro tip: Do NOT catch a ball with the hand that doesn’t have a glove.  Don’t ask me how I know, just don’t do it: 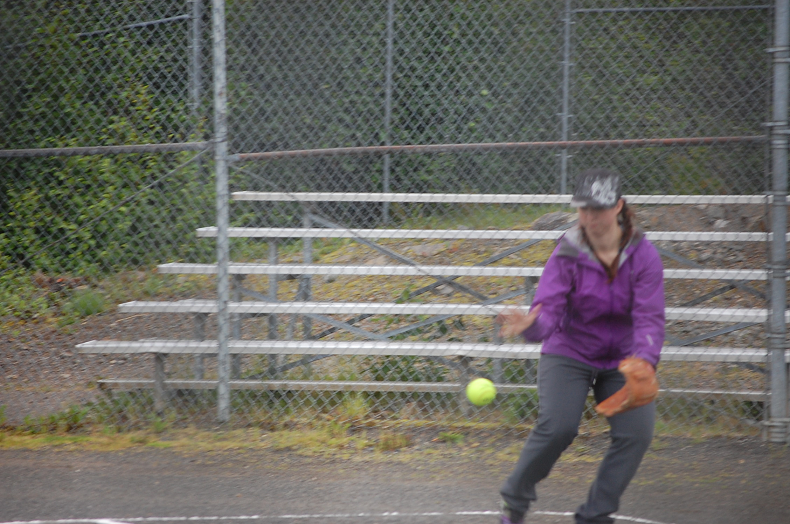 Wait, where did it go? 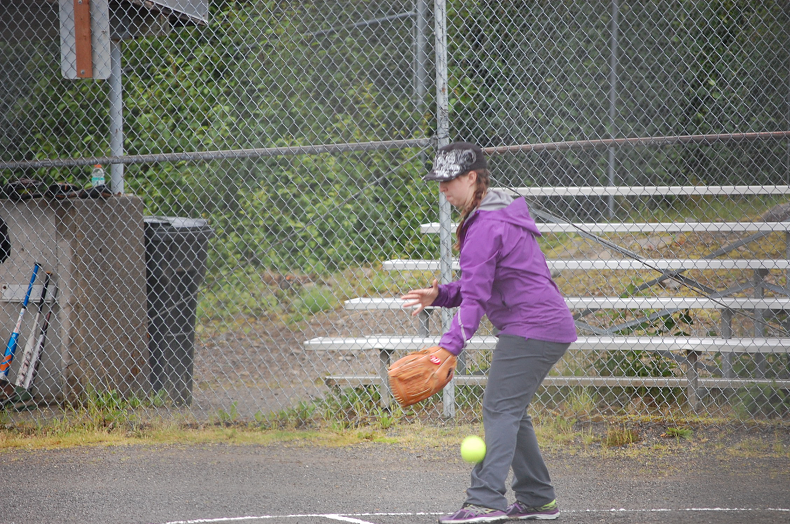 What am I looking at?  The ball that is not?

For the record I DID catch a few balls, and did manage to score the team a point…I think.

Thankfully the team is really low key -and everyone is just as happy to hit the ball as they are to make a home run.  Not that I would know -we haven’t exactly had any home runs.  But still!