Once upon a time I went to pay some bills.  It was a routine stop.  A stack of bills ready to be paid.  The lady behind the desk instructed me to go use the KISOK machine.  A new contraption that was taking over the world, and her job.

I approached the machine, unsure of what to expect.

It looked innocent enough, but I knew the truth behind the words. 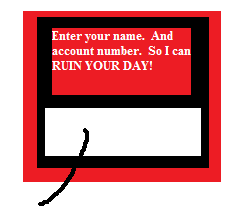 Against my better judgement, I gave it all the information it demanded.

I gave the machine my check and waited, just as it was commanding.  And waited…and waited some more until finally…

The machine commanded yet another payment, having not “received” the first!

At that point I had no idea what to do.  The kiosk had stolen my money!  As I stood there, arguing with the machine, the machines owner appeared.

Assuming I didnt know what I was doing, he decided to show me how it was done.  The kiosk decided now would be a good time to behave.

But even well behaved machines dont work right ALL the time.  The owner asked for my payment.  I pointed at Kiosk.

Kiosk was having none of it. 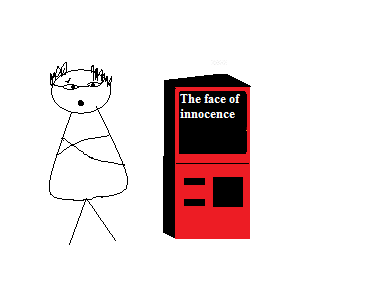 At first the man didnt believe me.  Assuming I was making false accusations about his machine.  He asked for his keys.

I looked away as the man opened the Kiosk and looked inside of him.

Inside the most inner parts of Kiosk, the man would learn the truth.

The man, finding my check lodged in Kiosk, apologized saying this never happens…It was now up to him to show me how to correctly use the machine.

Only this time…the machine refused to even acknowledge our existence!

The man was deeply hurt by his machine.  But like all good owners continued to support it by telling me that this NEVER happens and that he was going to have to call it in.  And that he would use it as a training opportunity, for future Kiosks to come.  Then he took me back to the counter where I had started my journey, and admitted defeat.  All was once again, well with the world.

One thought on “Adventures with Kiosk”