After a long, hard, 35 hour train ride that neither David, Amanda or I thought we would survive (mom and dad were just fine!) we stepped off in Chengdu.  Or more like got shoved off at our destination.  Happy to be there, ready to start the adventure, but hot, tired, thirsty, and confused.  And still having to catch one final trail we were fearing would be just as bad as the last.

While we sat waiting.  Tears staining certain faces, scowls pressed firmly on others – a couple walked by and pointed.  Pointing us out to their young child.  We forced a smile, waved, and went back to sulking on our suitcases.  But they didn’t give up.  They were persistent for some reason.  Wanting to interact with us…complete strangers.  Who didn’t even know how to say hello in their language.

A few hours later we boarded the train, and were pleasantly surprised that it wasn’t flooded with sewage, and that the A/C appeared to be working.  There weren’t people pushing their way through the crowded seats.  Infact, it appeared as if it would be a peaceful, quite, relaxing two hour train.

Ten minutes later, the couple appeared, giant smiles plastered across their faces as they pointed to their tickets, and then to the seats across from us.  They waved, smiled, spoke heartily in Chinese and pointed us out to their little boy.

No sooner had the train lurched off did the little boy start to get restless.  Sitting for two hours was not in his plans for the day.  Chinese or American – it was all the same.  He didn’t need to speak English to communicate that he was bored.

Tipping the garbage tray over I hid a piece of plastic underneath, then pulled it out.  He smiled.  And imitated me.  This went on for ten minutes.  He begged the woman with him for something until she gave into his whines and popped a piece of candy in his mouth.  His eyes smiled.  She gave him a few more pieces and whispered something in his ear.  He looked at me.  Then at his candy, and then handed me the piece he clutched tightly.  We both smiled.

For the next two hours we played put the candy in the tray.  Toss the candy across the table.  “Whered it go?” in both Chinese and English.  Atleast, I can assume that’s what he said.

At one point both the man and woman with him disappeared.  He didn’t seem fazed, so I didn’t worry.  Until they were gone for more than a minute.  Thankfully they both returned.  And not ten minutes later, they both fell asleep.  Leaving the young boy to play “Candy in the dish” with me.  And while I wanted to sleep too – after all, it had been a very long 35 hours, I continued to play the repetitive game.  I acted surprised every time he “hid” the candy, and his smile grew bigger every time.

One face I don’t think I will ever forget.

Sometimes words.  Are SO overrated. 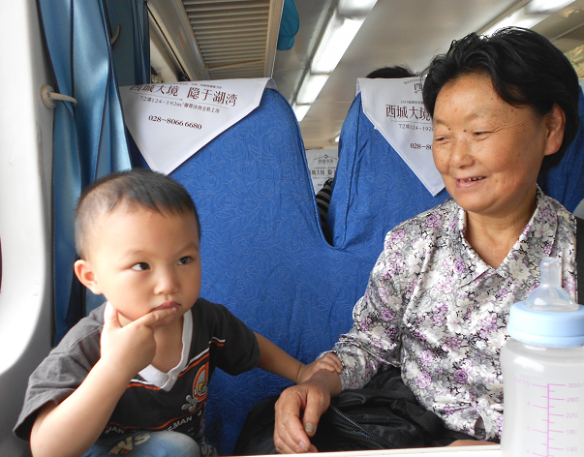