Our time was going fast in China!We had lists of things we wanted to see, and days packed with too much to do. The Great Wall was on the top of our list, but every morning we had tried and tried to see it -without success, we wondered if we’d ever make it to the wall.

We weren’t very good at getting going early those days. We tried. Oh how we tried. Setting our alarms for unearthly hours, waking up and getting going. But never quite succeeding to make it to the bus that went to the wall.The morning before we had tried, and ALMOST succeeded, but we missed the bus by ten minutes -thanks in part to the unhelpful cab drivers and signs being in Chinese. So this day, set on not ruining the next-to-last day, we decided to see another place on our “Top places to see before we leave china in two days” list: The Summer Palace.

It appeared to be fairly simple to get to. A bus here. A transfer there. A short jaunt. We all felt up to the challenge and headed off for the train station. In hopes of catching the next train to this Summer Palace, still unsure of what, exactly, was there. Summer in a Palace perhaps?

A supposed “easy” hike was actually a hike up the side of a big hill that included climbing over boulder rocks that were ½ our size. All along the way there were venders selling popsicles or cold water. We watched a few minutes and got the hang of it – they were selling popsicles for 1 yuan each. That wasn’t bad we thought and headed off to buy 5. The lady tried telling us that they were 2 yuan each – considering we looked like easy targets. But we held firm to our word, and got our 5 popsicles for 5 yuan.When we arrived at the top, it appeared to be a big mess of repeated buildings, and people. -as well as statues and other assorted idols. 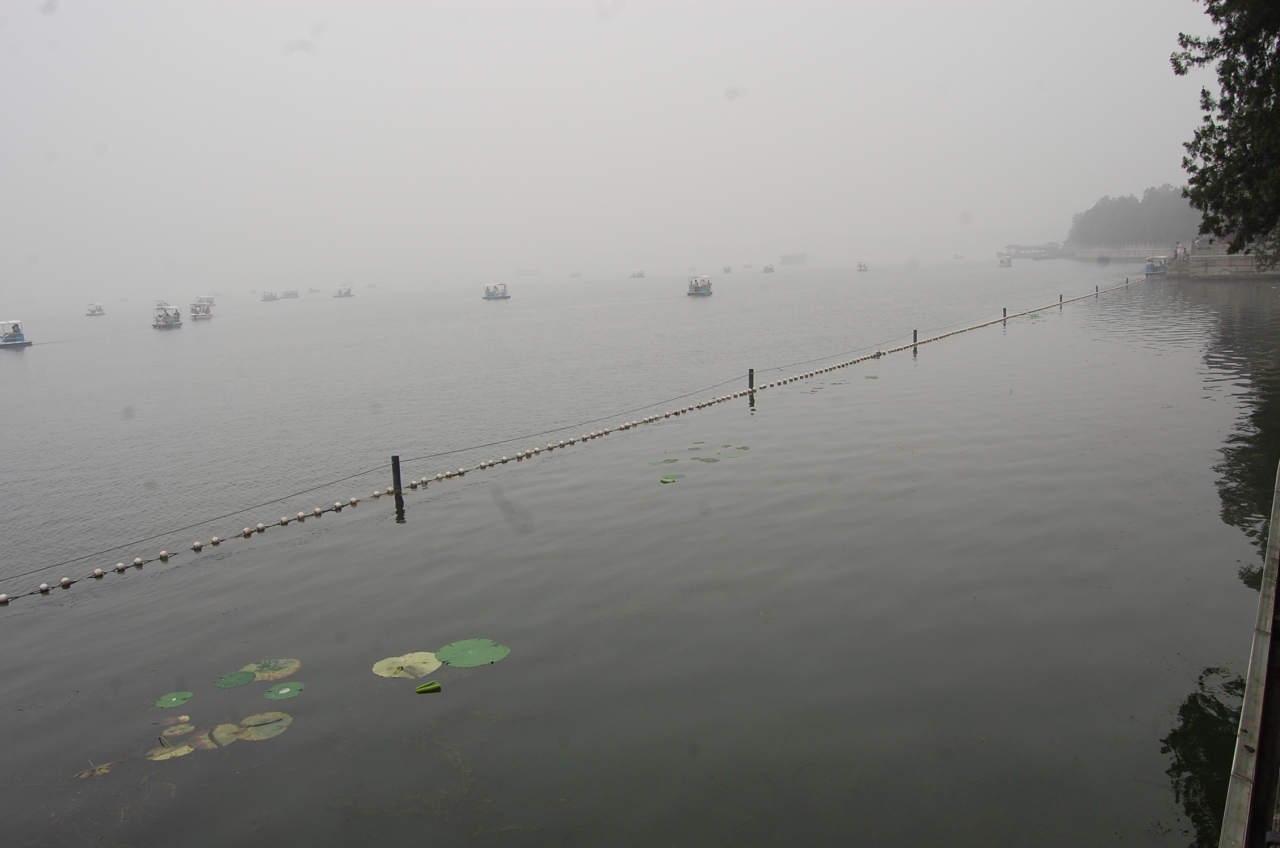 Over the top of the hill and down the other side, we came to Kunming Lake. 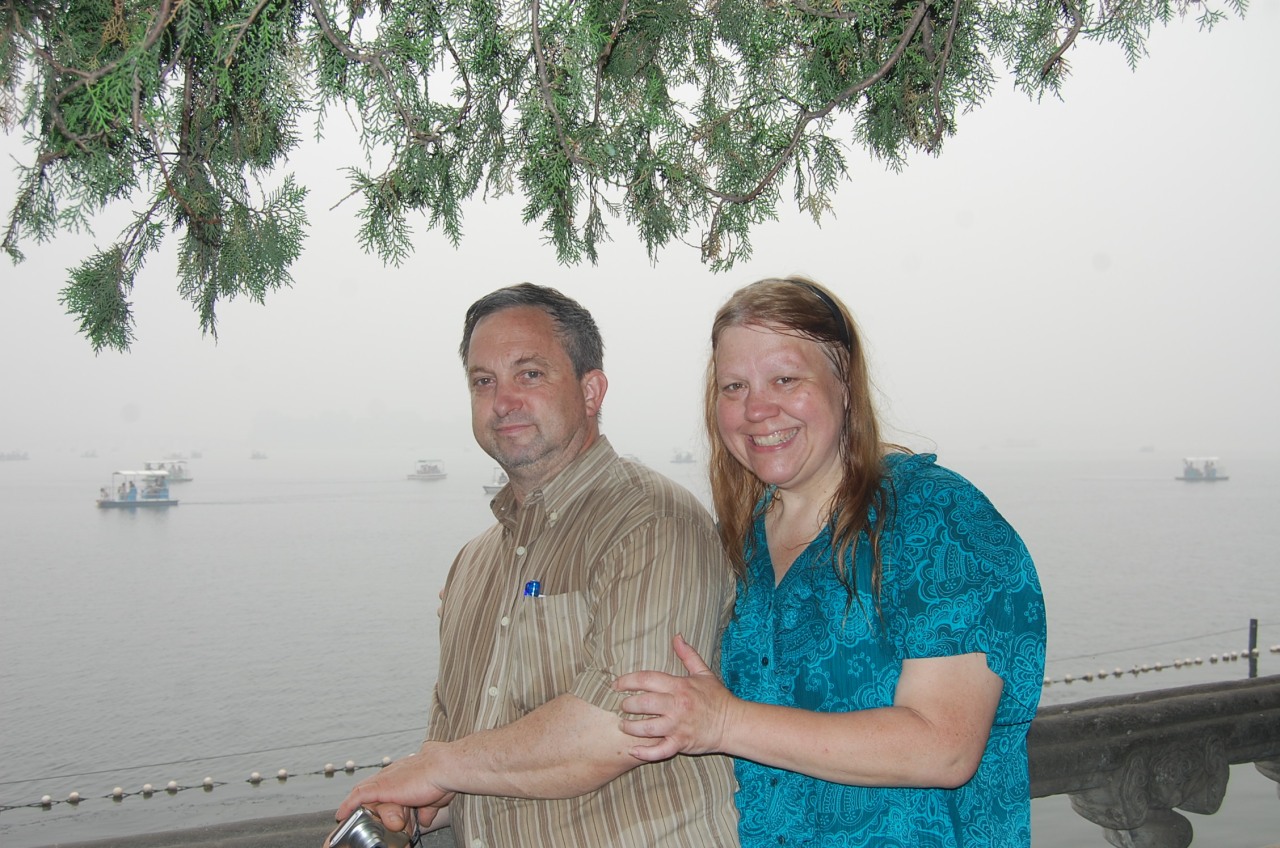 Mom and Dad in front of the lake.

A stop for ice cream! Ice cream was our favorite food while we were in China. 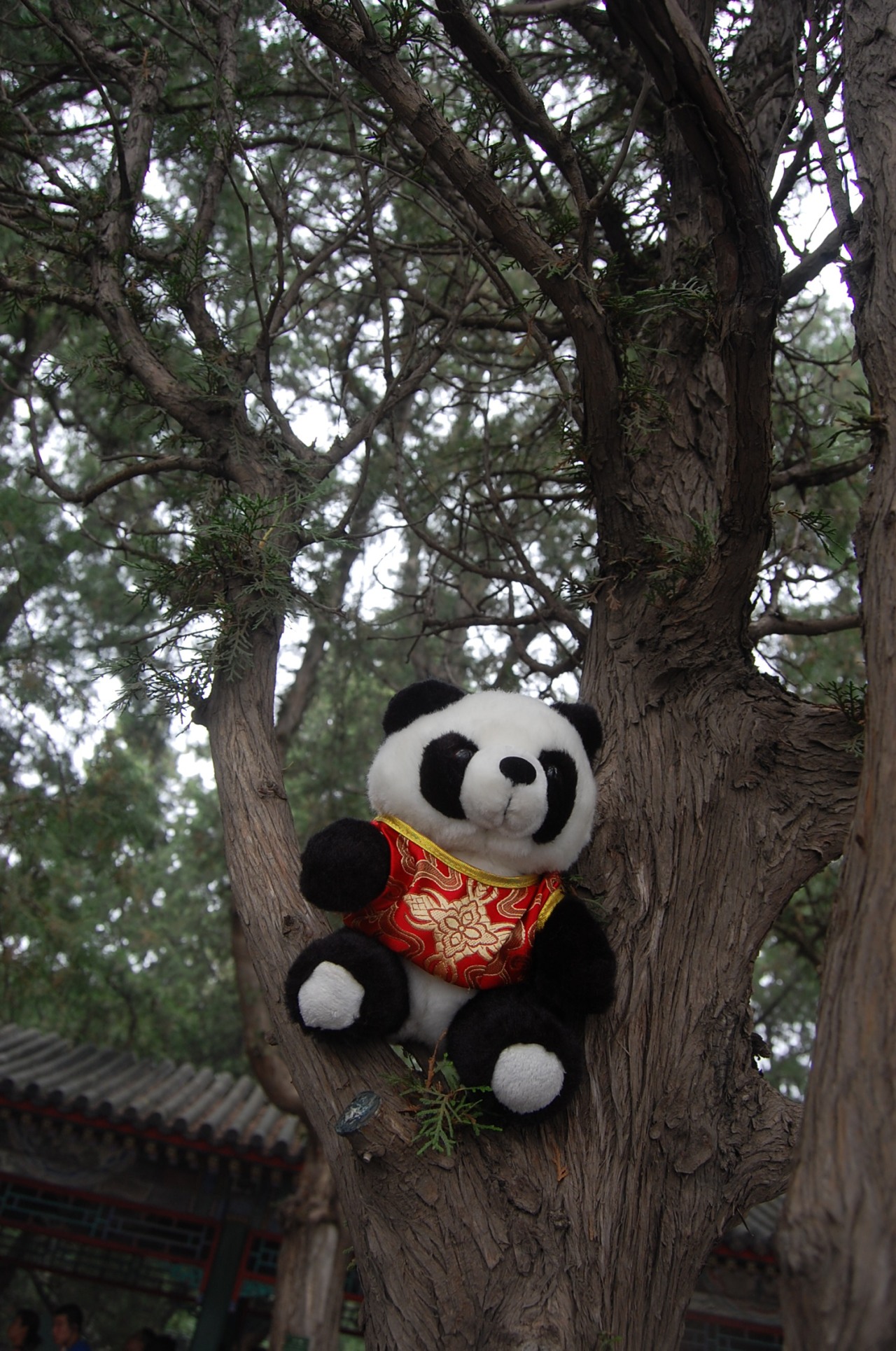 Po the Panda up a tree -watching us eat ice cream perhaps? 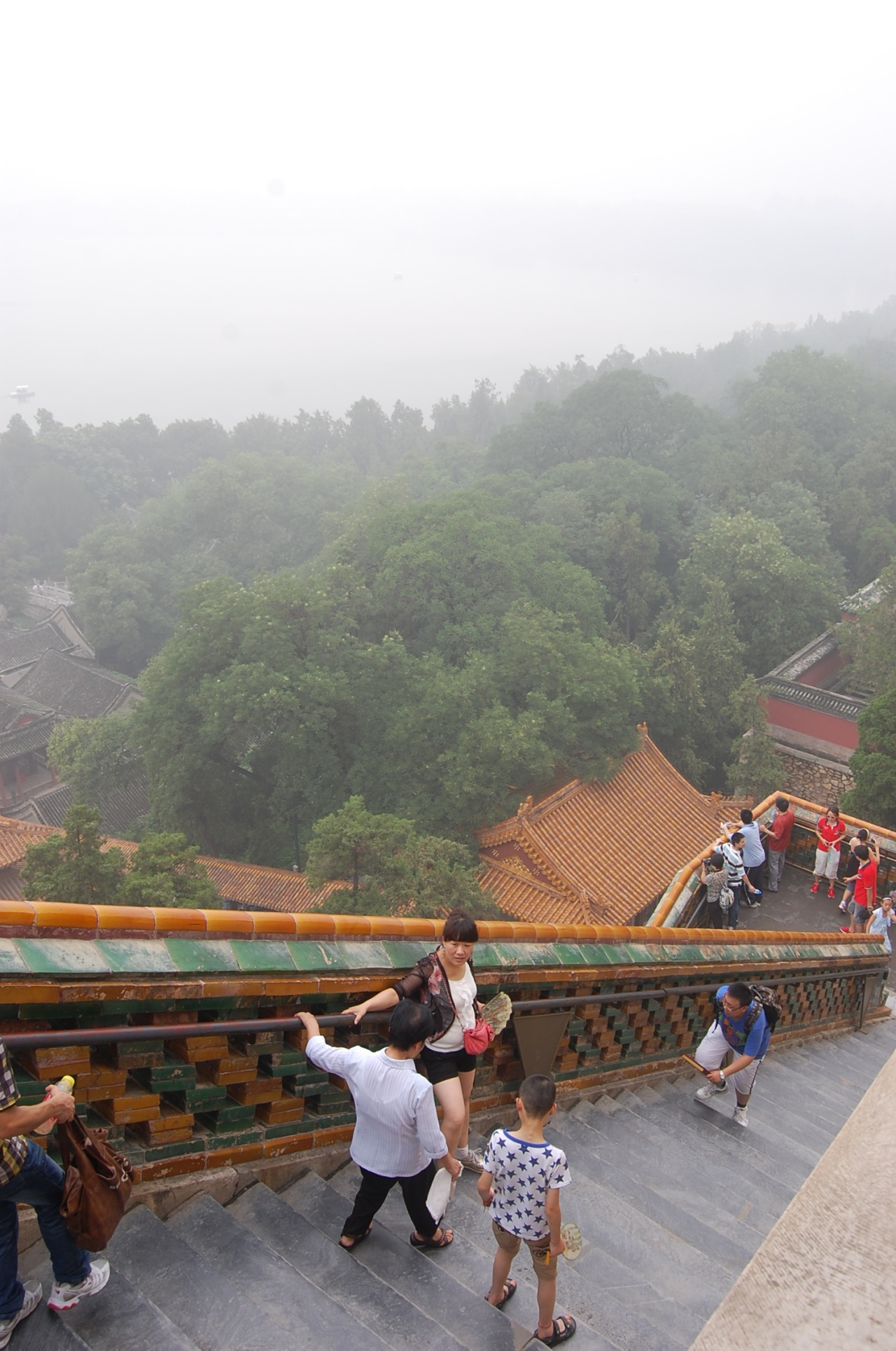 Finally, near the end of our walk around the Summer Palace… there was a huge staircase that looked like it lead straight up the side of a mountain, it seemed to lead to an elaborate building that looked like a temple or a palace of some kind. Seeing so many stairs looked a bit daunting, but we wanted to go up into the building and see what was inside. So up we decided to go! One staircase led to another and another and slowly but surly we made our way up to the very top. 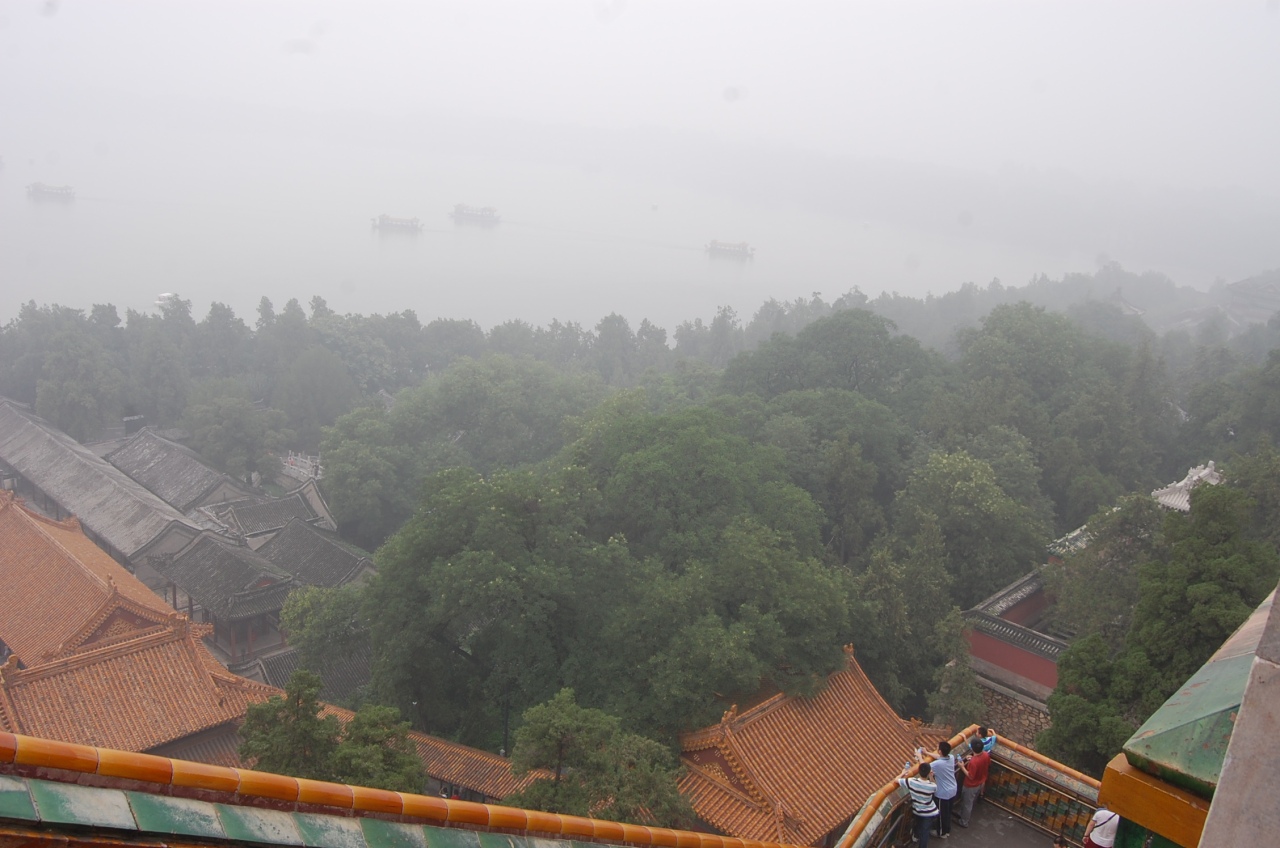 Once at the top of the “Mountain” we looked out and saw…well…not much. It was hazy. From the heat. It looked like a layer of fog, but it was HOT fog! And it was almost impossible to move in it. Eventually we decided that we would head back down. Down the mountain, down and back to our hostel – making it an easy, early evening.

The construction of the Summer Palace began in the early 1700’s and it was used as a garden for Royal families to rest and entertain. Though many of the buildings were destroyed and burned during the war in 1860 by the British and the French. The buildings were later rebuilt, and in 1924 the Summer palace was opened to the public. I just looked this up now, as I wanted to know the history behind this place! 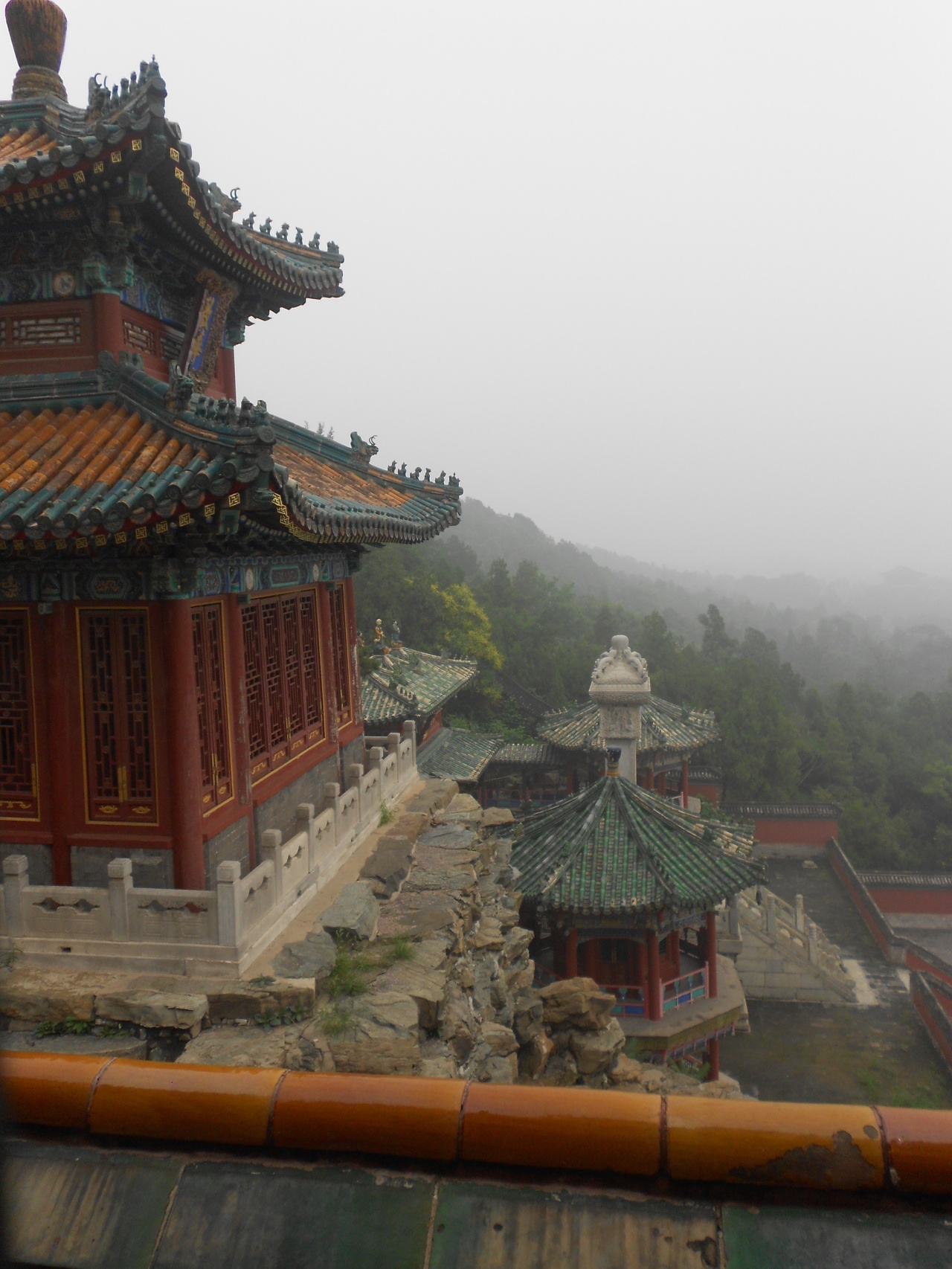 The buildings are very elaborate and cling to the sides to the mountain, though very strong, at first they look as if they could fall at any minute!

It was so hot and muggy and by the time we were done climbing all the stairs we wished we had some water with us!

Another set of elaborate buildings.

Po the Panda posed in front of the camera.

Just as we started to head down we felt a rain drop. And then soon after, another. Big fat rain drops started to fall! Faster and faster…and soon the rain drops were turning into rain! Now, were used to the rain, living in Ketchikan, but this was unlike anything we had ever experienced. Everyone else seemed to be waiting, and since we had been caught in a rain storm on a previous day and waited it out, we didn’t think much of this. We too stood under a tree – waiting

But it kept raining. HARDER too! We started to worry…about getting stranded on the top of a mountain! Then the sky darkened and we heard rumbles of loud thunder. Amanda was scared of bring stranded on the mountain during a lightning storm, and I started envisioning mud slides, hauling loads of people down the side of the mountain in a river of water and mud. In my mind it looked scary! Soon we decided to make the plunge and RUN for it down the side of the mountain. So off we went -RUNNING! Well, running as fast as we could that is -with rain POURING down!

The rocks were slippery, and the dirt had turned to mud…but not only that, the ground that we were walking on soon turned into a river! A river of muddy, dirty water that went up to our ankles! A RUSHING river, I should say! As we carefully tried to make our way down the side of the mountain, we sloshed through the rivers, yelling for each other to “BE CAREFUL!” We could barely hear each other over the roar of the water and rain

Then we had a problem – we didn’t know how to get off! We were heading down but we weren’t sure which way was the exit to the park! We kept stopping and asking random people “Exit?” and they would point, or laugh! They all had raincoats and umbrellas -but we didn’t and we were SOAKED. We were in shorts and t-shirts, none of us were prepared for a rain storm! Suddenly all the venders who had been selling popsicles were now selling umbrellas and ponchos! They kept trying to get us to buy them, raincoats weren’t going to do us any good by that time though, as we were as soaked as we could be, so we just laughed with them, and continued on our way down the mountain.

We only got lost once, and by the time we all made it to the bottom, the road was flooded. Flooded with water that went above our ankles. Water EVERYWHERE. We had never seen something like this before, we are used to the water running off the roads – not accumulating!!!

We eventually made it to the train station, bought our tickets (with soggy money) and got on the train. Other passengers looked at us snickered to themselves. We smiled. We had survived! Sure we were SOAKED from head to toe and then some, but we had made it down the muddy river mountain, and we were still alive! We rode the train to our stop, and got up – leaving behind muddy puddles in our seats!!When we got off the train we were in for a surprise, it was dry and hot out. It didn’t even appear that there was a single drop of rain! We stood in the hot fry weather and looked very out of place. It looked like we had all decided to take random showers with our clothes on and then had forgotten to dry off!!

On the way back I decided to take a peek at our things in the bag -the cell phone was in bad shape – soaking wet and flashing random things on its screen. As we rode the elevator to the top someone mentioned taking the battery out and letting it dry. And so I did, right then and there, and just as we stepped off – I dropped the battery down the ONE crack between the elevator and the ground. Of course, there was no way to retrieve it.

Thankfully all the other electronics were ok, and aside from being wet and soggy and having no way to dry our clothes, we were ok!! Though Po was soaked, shaggy, and had turned a shade of red from his Kimono getting wet!

It was fun, but much more fun when it was over! 😀 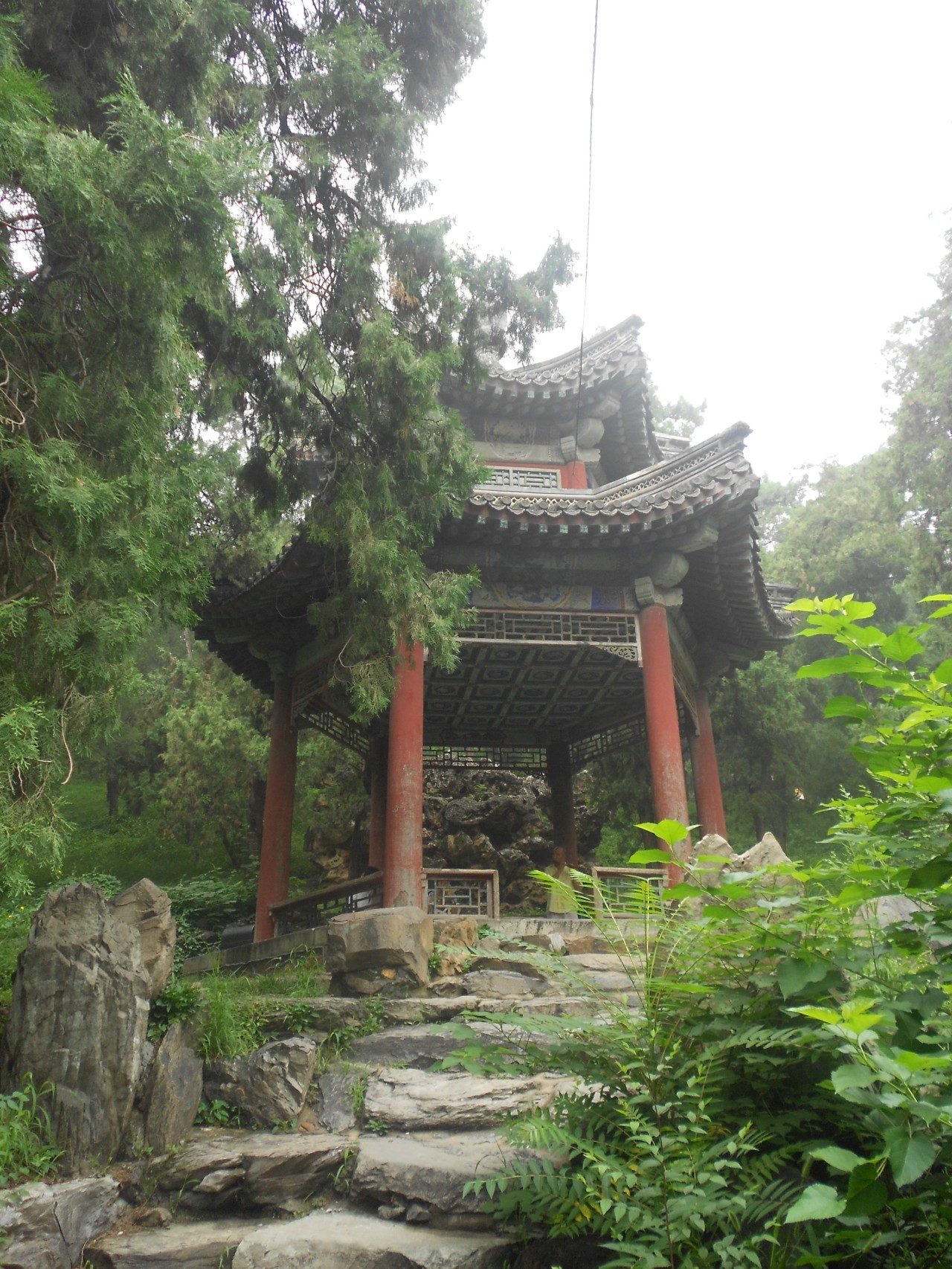 No trip to Beijing is complete without a trip to Summer Palace, just beware that flash floods can happen at any time!!!