When I first started babysitting, it was my sister and I, teamed up together.  We babysat for a family who had four young kids, and together it was a fairly easy stunt.  Well, as easy as it could be.  But then those kids grew up, and I guess so did we because my sister went off and got married and now?  I do the babysitting thing solo.  I baby-sit for a family who has three young boys, and recently a little girl.

Being left alone with three boys the first time went about as well as it could have.  I spent one full complete day alone with them – doing everything from getting the oldest on the bus (almost failing that job) to feeding them lunch and doing naps.  By the time their mom got home – the middle boy was in a puddle of tears, and I was about ready to join him.  I would have tipped my hat to her – because three young boys?  Wow.

Now when I baby-sit – I come prepared.  I usually try to find out what kind of a time frame I am looking at, if bed time is going to be involved and how many of the kids I will be watching before hand.  But not always.  Sometimes I have to wing it.  But I try to come prepared with atleast one “Big adventure” because the time I didn’t?  Was chaos.  As one would expect in a house full of boys.

Success was found In the form of giant poster board.  Flexible giant pieces of paper that are about as big as them.  I come armed with a template of a certain object, and piles of decorations to keep them occupied.  One night it was giant pumpkins.  Those pumpkins hung in their windows for months.  Another time we did Christmas trees – and I left little gifts under the trees when they went to bed.  Another time we built roads and garages for their cars.

I do as little as possible – leaving it open to creativity and using up as much time as possible.  Its amazing how occupied it can keep them.

I always have a hard time coming up with projects, however.  Especially ones that are age appropriate (the oldest is 7, the youngest is 1), fitting for the time of year, and most importantly – something that will hold their interest, keep them occupied, and let me walk away with a scrap of sanity.

I should stop now to say that they are good kids, and I enjoy babysitting them.  A Im just not used to dealing with kids for long periods of time, and they can sense that I assume.  Preparing a craft is just one way I let the evening be fun for (hopefully) all involved.  And sometimes, the most random crafts have the best stories.

Tomorrow night I go babysitting.  It took me a few days to put this idea together, and then put it into action.  At first I was going to go cruise ships – but I couldn’t find anything that would work with me.  I already did pumpkins, and while I thought about doing it again – I didn’t want to risk being told “We already DID this.”  And so I went with Owls.

To start I googled a Owl Template, then copied it onto a paper, and eventually onto a cardboard box that I premature to fit the paper I was bringing.  Ignore the crummy photo – the only thing harder than trying to draw an Owl (an artist I am not) is take a picture of it.

The idea is to paint them to glow in the dark, or color them with markers.  Then go nuts gluing pompoms, feathers, and googly eyes to them.  We also have some foam pieces that they can cut whatever they fancy out of it, and some tree theme stickers.  I will also probably toss in some other things I already have here from previous crafts.

I have always avoided taking paint babysitting, just because I fear the worse.  But I couldnt pass up the glow in the dark paint idea, especially for owls.  Hopefully it will just add to the owl and not the rest of the house.

Hopefully I wont end up shocking their parents into looking like this guy.

My almost 2 year old nephew who is visiting with his parents from England, saw me cutting these templates out and got all excited and wanted to “Do one too.”  I gave him my mistake owl and let him go to work.  This was his take on it:

Pay especially attention to the right “ear.”  I had messed it up and was trying to fix it, while he colored, he made me snip it just a bit more.  And kept instructing me not to stop.  When I would ask if it was good, he would gently take my hand and the scissors and place them back on the “ear” while staring me down as if to say “What do YOU think?!”

It held his attention for a good 15 minutes – which is a good long time for him.  Im just hopeful it holds the other boys attention for a bit longer!  Wish me luck, and hopefully I will be back to report! 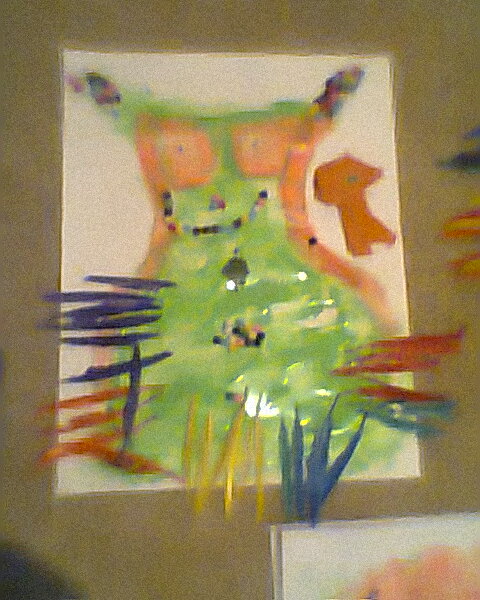 One thought on “Kids Craft: Owl”