Merry Christmas to all!  I’ve been feeling very Christmas-y lately, which may or may not mean I have all my presents bought, somehow it seems I’m forgetting a few things…oh well, maybe Santa will stop by and fill in this year!  We do have the fireplace decorated after-all, that has to count for something.  JD has been obsessed with pulling stockings down, and along with them the entire string system I have to hold them up.

David told me the other day “You might have to move those stockings somewhere else.”

“NO!” I said “I CAN’T do that! When Santa comes down that chimney Christmas Eve, he’s not gonna have time to hunt around for stockings, if they aren’t on the mantle then he’s gonna leave without putting presents in them!”

So I devised a blockade around the access point to that side of the room, and JD has been unsuccessful in breaking through so far.  And the stockings are still there, empty, but cheerfully and rather optimistically waiting for Santa.

Among the various items on my to-do list, were a whole host of DIY projects…in an attempt to save money, and mostly just because it’s so much fun! Most of the time that is, Mom and I have been doing lots of random Christmas Crafts, you’d think we were getting ready for a Christmas bazaar.  (That’s a fun word to type by the way, bazaar)

For gifts, one of the projects was DIY sharpie mugs.  Now, I had read a wide array of reports online about whether or not the sharpies would stay in place on the mugs.  And I have to say, I was a bit concerned.  But I thought “well I will buy a sharpie and test it, and if that doesn’t work, I will buy a pen specifically meant for mugs.”  So without further ado, I went online and ordered 10 white mugs, and one teacup and saucer for the tea drinker.

I bought a bunch of mugs here 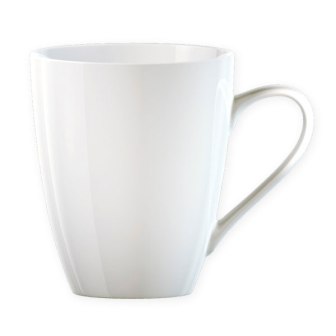 This was a UK site.  Only 1.29 each.  That’s pounds of course, not dollars, but a google search of “white mug” in google shopping should show even more options for mugs in the USA.  I wanted one that looked nice, not a tacky cheap looking shape, but one that didn’t cost too much either, and these fit the bill.

That’s it!  I used black sharpies because I read that the colored ones change color when baked.   I put verses and quotes, flowers and drawings all over the mugs.  Mom helped too.  It was fun, and if you make a mistake you can just wipe it clean with a damp cloth.

Here are some of the designs: 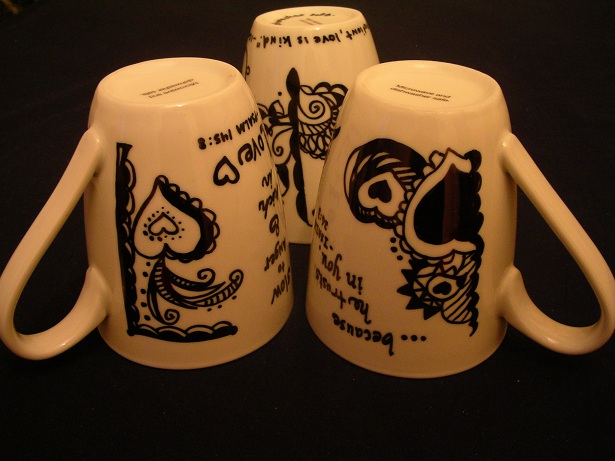 You could write and decorate someone’s name, or a funny line that would make them laugh.  For a coffee fan we put ” Doing my part to keep the coffee industry financially strong.”  You could write on plates or mugs, but I chose mugs because Sharpies are not food grade, and the outside of the mug doesn’t matter as much as the inside does.  (That sounds like a Bible verse there!)

Then we put them in the oven to bake.  We put  it on gas mark 6 for 1 whole hour.  Gas mark 6 on our oven is about  375 Fahrenheit . Some places online suggested half hour, some said 1 hour.  So we did a really high temperature and baked them a long time.  And then we tested the designs out…so far they haven’t rubbed off, and seem to be on there pretty permanently!  Yay!

I tested one of the mugs in the oven first, just to make sure the high temperature wouldn’t crack it.  I didn’t want to run the risk of breaking ten mugs all at once.

Christmas time is coming…it’ll be here soon.  Hope you are all almost ready!