I think the most creative costume I ever came up with was a box.  Saying that now, it doesn’t seem very creative at all.  But I worked hard all day trying to perfect my box costume.  I had a giant box that went over my body, and a smaller box over my head.  I was originally going to have box legs and arms but after not being able to stand without toppling over, I ditched that idea and went with brown jeans and a brown shirt.  I think it was my favorite because as I walked down the street being guided by what I believe was my angel sister – no one could see me, but I could see them.  At one door – a little girl opened the door and squealed “MOMMY!  There is a BOX at the door!”  I smiled.  But she couldn’t see me.

The only other costumes I remember were those that we wore year after year.  Depending on age/size we were usually a Pilgrim, angel, cat, or rabbit.  Or, a box. 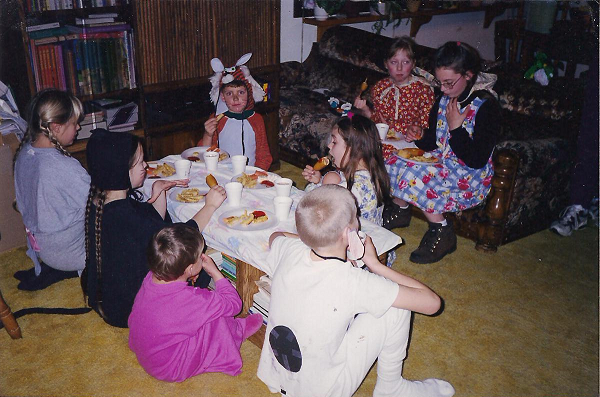 Im sure you can find the two pilgrims (Amanda and a friend) on the couch while the animals (donkey, tiger, cat (me!) pig and dog) gathered on the floor.

The pilgrim was a favorite because it meant wearing one of moms old school dresses, it was sort of a right of passage – you were now old enough to wear moms school dress!  It was handled with great care.  And usually paired up with a bonnet.  I guess we assumed mom was a pilgrim in her days.  And she pilgrims wore bonnets.  One year someone called me “Little bo peep” and asked where my sheep were.  I was mortified.

The angel was a bit harder to pull off, and not just because I was far from being an angel.  There were big wings that got stuck on and in everything.  Plus the halo that made you twice your size and the fact that you wore a dress.  I really didn’t like wearing a dress on Halloween because it restricted your movement.  As if a box didn’t. 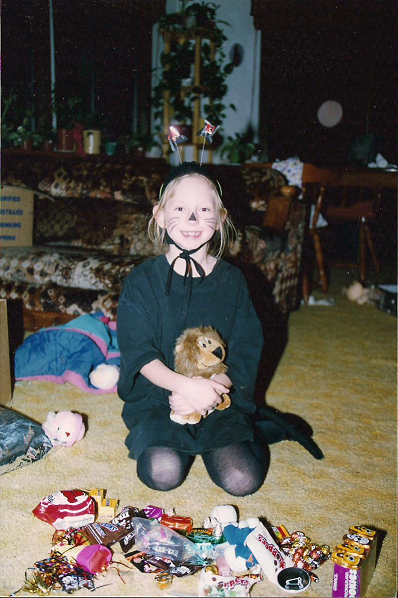 Check our her candy stash!  She would always hide it.  Then get mad if I ate it.  Not sure how she kept track of it all!

I think the favorite was the cat costume.  We wore that costume until it was probably illegal.  It was simply a giant black T-shirt of dads, with a black tail sewed to the back.  It was topped off with a black hat that had little ears on the top.  And that was it.  But it meant getting to wear make up.  Mom would pull out her make up bag and apply the whiskers, the nose, and if you were lucky – the lipstick, because we all know cats wear lipstick.

Look!  Its little me!

The rabbit was another favorite – mostly because of the make up I think.

This is JD’s (my nephew) first Halloween, and he pulled off his very own costume without any help from his mom or dad!

He is going as “Mr Messy Beard the Pirate”…and a cute one at that! 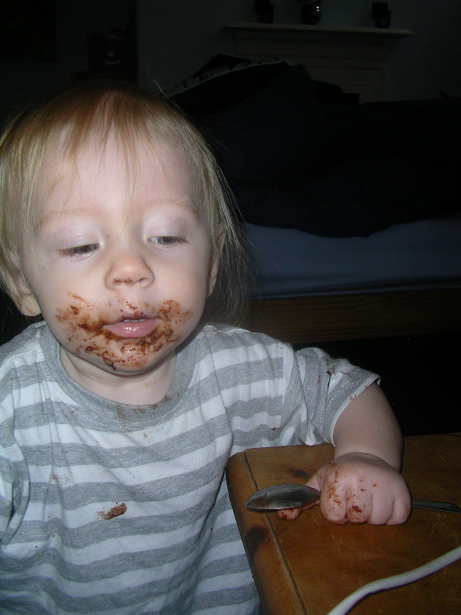 I think he steals the cake (or cookie!) on any costume – past and present!