Every year on June 14 (or atleast, for the past amount of years I don’t remember how many!) Ive attempted to out do Amanda from her birthday that she gave me.  This year, that was impossible, considering that on my birthday, we were in France.  But I still wanted to follow through with tradition – some version of a cake.  I always get crazy with her cake, and do something completely off the wall, and usually stupid.

Like the time I put gummy worms in it.  That was one sour cake.  Or the time I attempted to double stack a cake, with cherries in the middle.  Oh that was a mess.  It ended with me punching it.  That was fun.

This year, however.  I decided to totally out do everything – and made her a rainbow cake.

I never claimed to be a great cake maker.

Originally, your supposed to make 6 round layers from two boxes of cake.  But since we only had a few colors of strong food coloring, I whittled it down to 4 layers.  And set to work.

Red, Purple, Green, and Pink, which turned out more like red too, but oh well.

It went together nicely…and after the initial complications of getting the cake OUT of the pan, everything was pretty smooth sailing.

Then carried the final master piece to my sister, who asked me what I had just done.  I just smiled.

The joke was on her. 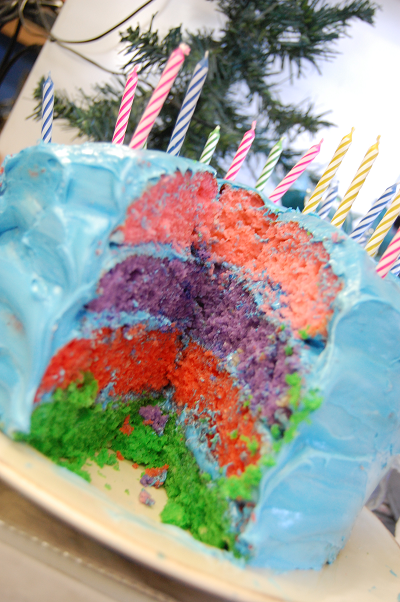 If it looks dangerous, that’s because it is.

After cutting us some unhealthy slices, we set to work.

Eating.  And generally getting hyped up on sugar.

Which is when we looked up over the desk, and realized that our beloved cake, which looked more like a tower of Dr Suess…had taken a fall.

The top piece had slid off, and part of it had landed on the floor.

If we weren’t so HIGH on sugar we might have cried.  But instead, we laughed.  And giggled.  And laughed some more.

Must have had a gazillion and one calories, and more sugar than one could legally be aloud.  But it was good.

Of course, we put it in the fridge, and checked on it a while later, to see that the top part, had slid off.

But we were too giddy from our piece earlier, that as of yet – it hasn’t hit us.

As my sister said:

“10 layer rainbow cake with lots of colors and lots of frosting and it
was so high and it fell over and now i am so high from sugar!!!!!
“

I think it was a success.

The cake that is.

Your as old as you’ve ever been!!

3 thoughts on “Happy Birthday to my best sister!!”