{Edited to add: Just in case anyone attempts to read this, I have been trying to tie my points together, with no success.  Im still working on editing it some.}

Since, then, you have been raised with Christ, set your hearts on things above, where Christ is seated at the right hand of God. Set your minds on things above, not on earthly things. For you died, and your life is now hidden with Christ in God. When Christ, who is your life, appears, then you also will appear with him in glory.

Often times, my thoughts are diverted to my camera. I compare life scenarios with my camera…and attempt, in some small way, to make sense of things. Either by trying to compare my camera to life, or life to my camera. Today, however, it’s the latter.

While on this recent road trip we were on, I spent a lot of time with my camera. After all, when your in the car for 24 hours straight, with three people…you only have one of a very few options. Bail out. Kick and scream. Make small talk. Fight. Or turn your attention to something, or someone. All of the above have been tried, and proven. But not recommended.

By this time, we consider ourselves “Pro Travelers.” We know how to get through Canada in 24 hours. We know how to survive being stranded in a foreign country (this wasn’t the first time, even though some of us handled it like it was). We know how to do just about anything and everything involved. We also know that in order to survive 24 hours straight in a small space, you have to have creative distractions. Really creative. Such as music, books, food, conversations, and of course, inanimate objects, such as Nik himself.

The first few hours were smooth sailing, I shared Nik. But after a day or so, I became passionate with him. I didn’t want any one else touching him, handling him, taking pictures…infact I was pretty happy to sit still with him in my hands, as I talked and mumbled small words. Ok, so maybe it wasn’t that bad. But still.

Nik was a really creative distraction, and made the time pass.

All that is to say, that I got a little…creative with him. Or atleast, I tried. I *Thought* I was.

I found a little switch on him that sent his lens into a manual focus mode. “PERFECT!” I shouted. I have been trying, to figure out how to blur the background out while the person, or object I want, is clear. Ive seen it done, knew it was easy, but had no clue how to do it. Apparently, even beginners know this, because it wasn’t covered in any of the books, manuals, or articles I had read. Duh. Because it was just THAT simple, that I happened to pass over it.

I had a lot of fun with this little switch. Flipping it to manual, adjusting the focus to what *I* wanted, and snapping the photo. I beamed with pride when I took my marbles to the park, and got, what I considered to be, some really awesome pictures. You know, if your into marbles and all that. (Clearly, I have lost mine, no pun intended!).

At thanksgiving, I posted on our business blog, about focus. Focus on holidays, and how my perspective is that we focus on all the wrong things around the holiday season.

But lately, I was thinking. A rare thing for me!

I was flipping through the pictures we had taken, all 1300 of them, and noticed something about the ones that were taken with the manual/automatic switch.

I was laying on the hard wood floors in our house in Oregon. My marbles (not the mental ones!) were rolling around, while I attempted to take their pictures. 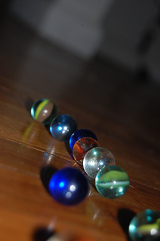 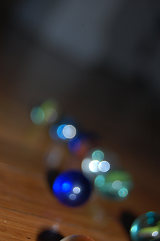 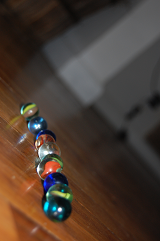 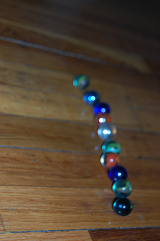 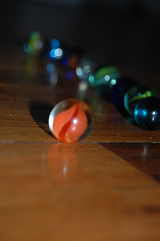 Until I had a good group of pictures that I flipped through, and deleted the ones I didn’t like. Or didn’t turn out. Or were of Marschels head, instead of the marble (Hey, they looked similar).

And then I made a small, mental comparison that sort of blew up in my face as I thought about it.

“Focus on the solution, not on the problem.” – Jim Rohn

Or perhaps the homespun, not so original, one about focus on the problem, only makes it bigger. That most likely originated from the above.

But I thought a little deeper, and a little harder, and came up with the following.

How many times do I, in my life, flip the switch from automatic (where God is in control) to manual and attempt to do things “Better” because I “know how.” How stupid is it, that I would take the focus off of where it belongs (God) and put it where it doesn’t (on me, or a problem).

Marschel got a hold of my camera, while it was still on manual. Not knowing, he started snapping pictures, and became frustrated when they were all blurry and out of focus “Something is wrong with your camera” he told me. But being “Too busy” I just told him to put it down (or put the strap over your neck first) and forgot about it. Until he approached me later in the day and said “Chir, I figured it out. This little AM switch was off” I laughed, first, because it wasn’t an AM switch, but also because after a few minutes of struggling, he figured out that if it were on automatic, it would produce better results for someone who didn’t know how to turn the lens, just the right way.

All this is to say:

Its not about what settings your using, but rather where your focus is.

I was thinking about this yesterday.

God knows how to turn MY lens. He knows where my focus SHOULD be, and He sees the bigger picture. While I, in my selfish fits of rage, grab the controls, flip the switch, and go about life, snapping useless pictures, becoming angry because they are blurry.

When I finally come to that point, where I am tired of blurry pictures. Tired of chasing my tail. Tired of running around, not knowing what to do or where to go…do I realize, once again, and not for the first or the last time…that my life, is better off in His hands. Its better off on manual. Better off with God. Who sees the bigger picture and is able to direct my focus back to where it should have been, all along.